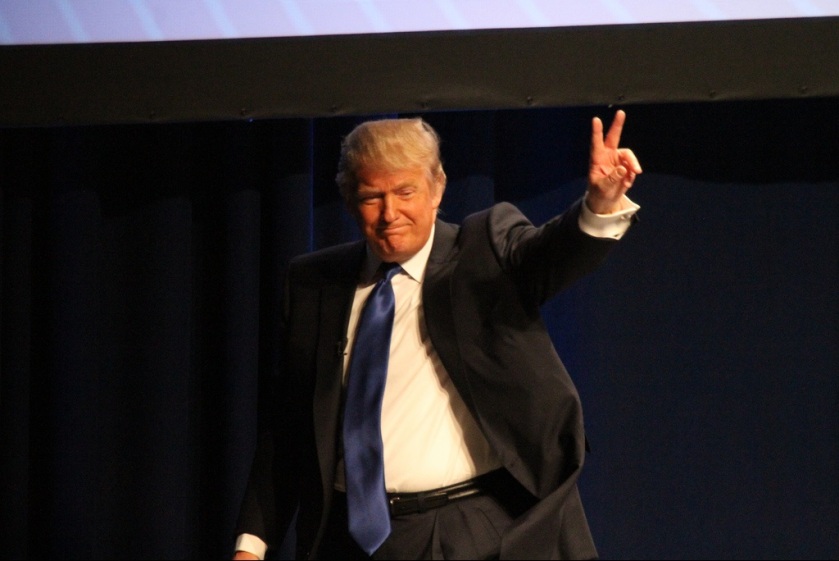 “So many self-righteous hypocrites. Watch their poll numbers – and elections – go down!” Donald Trump tweeted on Sunday morning in response to the leak of a tape of him making lewd comments about women. He needed to come back from that fallout, but for the first time in his campaign, that tweet was flimsy, just bluster, and he knew it.

Hurricane Matthew blew through the States this weekend and it seems took Trump’s campaign with it. By Sunday afternoon, when the sun was beaming again through the fresh, cool air, there was a new lightness in the air. It was over.

It’s a month out from Election Day, but I’m fairly certain now, Trump will not be president. But honestly, I don’t think he really wants to get there.

This election year has been like a hurricane, one exhausting emotional rollercoaster. The most real thing seemed to be the yearning for something real.

Now that things are starting to settle, I’m thinking there was never any real alternative to Hillary Clinton this year. Bernie Sanders on one side forced her to be more ideologically pure, and Trump forced her to get more personal. The whole thing has felt like such a reality show, a virtual reality political game put on so that people can feel and express emotions they have a need to release.

Trump’s campaign seems to have intrinsically known this all along. Campaigning without a solid vision of how you want to govern is basically campaigning to make your opponent stronger. And people have picked up on that. What has stood out to me is that minorities and women who support Trump have jumped on the campaign as a referendum on their own communities, wanting to spur change on their home turf, simply wanting the conversation back home — and thus the wider society — to get more honest.

Trump’s campaign, along with Sanders’, has also raised good questions on authority and institutions that we didn’t have before. How corrupt is the Democratic Party? Does the Republican Party stand for anything at this point? How often and in what circumstances does big media blatantly ignore news or, the opposite, play up worthless news, carelessly heighten emotions for ratings? And what should we make of the way Hillary Clinton treated a 12-year-old rape victim in 1975?

In general, this virtual reality hurricane of an election has also spurred more thoughtfulness among commentators on our political system and on voters. Buzzfeed ran a poll recently that showed support for Trump along ethnic lines for white voters, finding that people of Italian and German ancestry support him the most. (Edited to add: But this also strikes me as odd and unfamiliar, an odd disconnection and self-objectification. Why did it take a poll to learn this about your own people?) The article makes the great point that German immigrants had to suppress their identities during the two World Wars, that this likely explains their conservatism. Trump himself is the grandson of Friedrich Trumpf, a German barber who immigrated to America in 1885.

But, I wonder why it is then, that the actor George Takei, who along with his family was shoved into Japanese internment camps during World War II, has been so compassionate, humorous and speaks out for humane causes?

But Trump, whose family had to suppress their Germanic roots through two World Wars, has been doing something so different?

What is it that’s not being said here, underneath all the “revelations” about him now that are not surprising at all?

If I had the chance to interview Trump, this is what I would ask him today:

Why this need for a presidential campaign? Why hasn’t he simply been enjoying retirement in, say, Monaco and Singapore? Did he really believe America would go for a president who went through the excesses of the Eighties like he did? It’s as if Madonna ran for president. He couldn’t have actually thought that tape of him would never come to light. The country has been becoming more aware of and intolerant of sexual assault in recent few years. Did he really think the country would be lenient of his past behavior? His comments have been insensitive and tone-deaf, in the most extreme degree. Why is that?

And why have you, grandson of a German immigrant, made comments that have fed into or fed off hatred against Muslim immigrants?

I hesitate to write Trump off completely. I don’t think he’s anywhere close to being a Hitler. I think that very often, he has confused being a businessman with being a politician. His initial reactions to people and issues are very telling about where he actually stands. Angela Merkel – loves her. HB2 – Why? I think it’s even possible that he will be friendly to Muslims in the near future. It’s like he wants to do great PR and keep it real, but keeps having to backtrack when he realizes politics just doesn’t work that way. Yet at the end of the day, Trump the businessman still wants to meet desires, bring out instincts, and give to people what they want. Unfortunately, he has gone a little far in, you know, bringing out things like racism and misogyny and xenophobia (or has he just ridden the wave of it?).

His off-the-cuffness on Twitter displays a great skill for reading the culture, knowing how the country is feeling as immediately and easily as reading a sign. This is a skill Sanders and Clinton do not have. It’s what Trump had during all his years in real estate, which in recent years looks to be an industry that’s changing beyond the need for his skill. The sense of place that we used to have is disappearing, changing. The instinct, the buzz that tells you of the next great place to build the next tower in New York, Las Vegas, just doesn’t matter as much as it used to, or at all. The sight of a gold-plated, black glass Trump Tower on Fifth Avenue is just not as potent as it used to be.

And as that slips away, what does someone of his generation have to hang on to?

As a more recent immigrant to America, I’ve also been thinking about how much our homelands affect us, no matter how much we think we are away. The price of becoming American used to be a severance of feeling. You rejected it in some way, suppressed it, forgot it, so your home becomes a foreign place to you. But the Internet and social media have changed that. Even if we went to war with Germany or Japan today, the amount of empathy Americans have with people in different countries built through online connections would never result in another internment camp.

And today, Germany is a place where Merkel coolly led the EU to prevent economic panic after Brexit. It’s a country where this small village has set up a program to house and treat Yazidi women raped by ISIL.

Is it possible that at the same time his professional skills have become irrelevant, Trump’s own home country has also left him behind? Maybe this is what much of the fear and confusion these past few years have been about.

So as this election draws to a close, I’m starting to see Trump more clearly, and more not as this larger than life figure, but as a person, the grandson of a German barber.

If what has been real this year is how much people are yearning for something real, and Trump’s willingness to engage with that on an instinctive level is what made people respond, then I think he does have the power to transform the negative energy, the violence we’ve been caught up in.

Trump wants to “Make America Great Again.” Maybe, hopefully, he will do that.