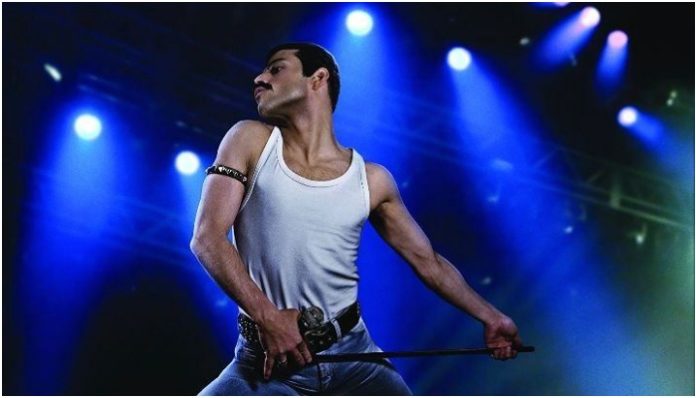 I saw Bohemian Rhapsody on a cold, rainy night at the Wynnsong Theater in Durham. I had rushed over on a spontaneous whim that night. Walking through the lobby, I looked around and expected the movie to be more of an event movie and to have more promotion. Life-sized cardboard cutout of Malek in a disco outfit, anyone? But there wasn’t much at all. During 2018, when it seemed like everywhere you went, you would see decline.

I had been looking forward to this movie for years. The early film image of Malek in a lone spotlight, looking so much like Freddie Mercury, was thrilling. It looked like art. Finally, some art! The movie delivered. It was entertaining and comfortable, and one of the best movies of the second half of this decade. However, it did not deliver on the potential that was promised in that first image. Instead of a bold exploration of Mercury’s life, his artistry and the band’s decades-long journey, it pandered to Millennial memories and caved to 2018 realities.

Fall 2018: Dusty, dirty, dark. Overheated, collapsing sensuality. Hurricanes and fires. Politics was too loud and vehement, and it always felt like mass shootings and bombings were happening, and you were kept off-kilter and twisted around, always by your instinct feeling like a health or environmental disaster is just around the corner.

In the midst of this was Bohemian Rhapsody, which opened just a few days before the mid-term elections, capturing the intense mood of the country – and especially I think the mood on college campuses. The movie brilliantly used the 1970s and 1980s as backdrops to relate to what was happening in 2018. And there was Malek, dancing in front of that overwhelming, sweaty crowd as Mercury – Was it as Mercury? Or was it as himself? In the terrifying rush of Fall 2018, it was hard to tell.

From the opening sequence of Malek walking slowly through the Mercury apartment cut with scenes of the set up of Queen’s Live Aid performance, you could tell the movie was special. “Somebody to Love” plays as the camera follows Malek’s back, cut with images of lighting technicians, suitcases, a picture of Marlene Dietrich on the wall. This is a familiar, real life scenery. And this movie is special in the way some movies are, that you feel how much it was cherished by the people working on it. Like the pan up to Jake Gyllenhaal lying on a highway in Donnie Darko, how meaningful the camera movement is. This is how Bohemian Rhapsody felt from the first moments, which is rare in these years.

And then there was Malek, who was thrilling to watch as he moves just like Freddie Mercury, with that physicality that had such sense of humor, openness and strength. Wearing those recognizable white tank top and white pants, his arms pumping as he walks. The world is a dusty, hot mess. AIDS is around the corner. In this moment, the artist ascends the stage.

Although I have been looking forward to the movie and was rapt with the opening sequence, I was still cautious about this movie. I was afraid it would be wrecked, and wreck my fragile hopes along with it. I also had a knot in my body that would not unwind. Fall 2018 was a – I think the word is “mean” – not just angry but a mean time. I don’t think I was alone in feeling that, since the other people in the theater seemed as frustrated and uninterested in the trailers and advertisements as I was. It took me sometime to unwind the tension in my body so I could enjoy the movie. After I came home that night, I wrote out the skeleton for this review, but felt nauseous, and so I hesitated. Was this the right perspective? Was there something more to it I need to let settle about before putting it out there?

The love interest and relationship in the first half hour of the movie felt one-dimensional, and looked too contemporary. Lucy Boynton, who played Mary Austin, Freddie Mercury’s long-term love, looked too much like she’s a girl in college right now.

Then, the movie smoothed itself out. The knot in my body relaxed and I was carried along with a story in a familiar Hollywood style, a bit rushed in parts but comfortable and enjoyable. The dynamic between the band members was funny and relatable. And the movie was pleasurable in that you basically get an unfolding two-hour show of Queen songs and you’re reminded of how amazing it is that the same band wrote both “Killer Queen” and “We Are the Champions.”

(The one Queen song that was not used the right way was “Crazy Little Thing Called Love,” which for some reason was played over a late night party scene with a completely different tone. Other than that, the music fit the movie perfectly.)

Queen always felt like a very contained band to me. In my memory, Freddie Mercury was this swirling, dancing man under a lone spotlight, who died from AIDS, and the band seemed to hold so much of the darkness of that time after the lyricism of Led Zeppelin, after disco, but before the energy and internationalism of pop music. The other artists who I associate with that time are Prince, David Bowie.

Why did a movie about Freddie Mercury feel so relevant last fall? It’s because Queen was so much about singing.

There is so much going on right now that is not being said or is buried. It’s thrilling to think of a man singing and having a voice, and who isn’t weighed down by trying to look cool on stage and by conventions. Who is a bit strange and is bold in his strangeness.

And this is the only movie with a young person in the lead right now that feels true. We’re passing through a time during which young people are not just stressed, not just stretched to the limits, but in a fight for our futures and it’s a fight that older people who went through the ‘70s and ‘80s simply do not understand. Can older people not feel it? Sometimes, as I drive around this area, I can feel the collapse of parts of this community and I wonder just how much talent and potential has been completely ruined. For people to grow and to learn, we have to be able to do and say. We have to be able to express. We need to be able to move the way we want to. We need to be able to sing.

This was my biggest disappointment with this movie.

Queen was so much about just singing. Sing anyway. Crank up Bohemian Rhapsody in the car, in the shower, head-bang, jump around the couch. Make a fool out of yourself. You have full permission to sing.

Last fall was a time when we really needed some singing. These years are a time that desperately need joy, hope and inspiration, truth.

Does Rami Malek actually sing in the movie? Unfortunately, he does not. Malek revealed early on for the movie’s promotion that it’s an “amalgamation of a few voices” – a Mercury-blend, or Mercury-mush, which makes me itch with anger. I would have preferred only Mercury’s voice himself, or just one other singer. I would rather have one voice that soars, that’s flawed but real, than many voices that don’t sound like anything at all.

Then again, the lack of real singing probably protected Malek as a performer when, days after the movie was released, a gunman shot at a crowd in Thousand Oaks, Calif. These years are also a time when any opening for truth and relating is quickly overtaken by violence.

The movie also has been criticized by reviewers for being inaccurate, and that’s just a part of the movie’s core problem, which is that in many ways, it doesn’t seem to be about Queen at all. The band in the movie doesn’t have nearly enough fun. Queen is 1970s and 1980s rock gods, after all. But the guys in the movie are so intense and stressed out — Hey, just like Millennial college students! From that first image of Malek as Mercury, I wanted an exploration of his sexuality. I wanted to see him writing music, the mystery of that creativity. I wanted him to be out in the world of disco, pop, rock, meeting Michael Jackson.

I wanted to see a richer depiction of the band that produced albums like A Night at the Opera, the album I listened to as a teen. In between teen angst and freedom in college, there was Queen for me, keeping everything elevated. “Why be so miserable? There is art, and there is life.” A Night at the Opera goes from Seaside Rendezvous like they picked up some sheet music from the 1910s, to The Prophet’s Song, with “Listen to the mad listen to the mad listen to the mad maaaaaan!” to “Love of My Life.” If you listen to a full album, you also hear how different it is from listening to them on the radio. On the radio, you hear their hits and feel energized. In the album, you hear a bigger story. A wandering sadness, and the knowledge of how the years go on and we have to carry on, one of the lessons about life that Queen’s music holds safely for listeners so we can go about our business doing other things.

The band is releasing a soundtrack for Bohemian Rhapsody, of course, and it is full of their biggest hits. Before that though, the last compilation album they released was in 2014, and the first track was “Let Me Be in Your Heart Again,” by lead guitarist Brian May. In the Vulture story about how the movie was developed, they noted that Sacha Baron Cohen was originally going to be Mercury, but dropped out after a conversation with an unnamed member of Queen.

I go, ‘What happens in the middle of the movie?’” Cohen said. “He goes, ‘Freddie dies.’ I go, ‘So wait a minute. What happens in the second half of the movie?’ And he said, ‘Well, we see how the band carries on from strength to strength.’ And I said, ‘Listen, not one person is going to see a movie where the lead character dies from AIDS and then you carry on to see the band.’”

You have to wonder how Cohen’s remarks were taken. Mercury died in 1991, and the rest of the band have been carrying on since then. May and drummer Roger Taylor were the executive music producers on Bohemian Rhapsody, and control the rights to the band’s music.

In the same Vulture article, producer Graham King was quoted as saying, “The reason this took so long to get made is, [Mercury] had a very complicated life.” Really? It was complicated, but it wasn’t that complicated. It should not have been difficult to have some scenes of his loneliness and existential angst, and how he dealt with them. For adult audiences, it wouldn’t have been a stretch to have some scenes of debauchery and nudity like Sacha Baron Cohen wanted. Seeing what Malek did with the material, you wonder how he would have handled a more in-depth exploration of Mercury’s life.

In the weeks after the movie came out, you did feel a shift in the world. Some intellect and some verve and movement came back. And then it was gone again.

A lightning bolt on a rainy night.

Sometimes, during these years, it feels like art is all we have. And this movie was it.