In a corner of the Morgan Imports store is the store’s Christmas room, which is filled with ornaments, trees, figurines and toy houses in wonderlands with names like, “Snow Village” and “Mistletoe Farm.”

Standing at the entrance to the room, Peter Bangasser points out carolers to his baby. Bangasser used to live in downtown, and that’s when he started shopping there. “My wife and I get an ornament here every year,” he said.

Alice Isard, 6, said her favorite part of the store is Buck, the reindeer who has given probably thousands of kids rides. She was looking at a Christmas tree and then helping her father, Ben Isard, pick out presents.

Holding up a coaster, she said, “I like this cup mat.” Isard, humoring her, said, “Cup mat? You want this cup mat?”

Morgan Imports in downtown Durham is celebrating its 50th anniversary this year, and as the holiday season began, long-time customers and new customers alike stopped by to get into the Christmas spirit.

Richard Morgan started the store in downtown in 1969. Since then, it has grown into a destination and stalwart, filled with a huge assortment of goods ranging from cards, books, soaps, lotions, and candles, to clocks, kitchen goods, science kits, journals, and also furniture. There is also the abundant decorations and collectibles in the Christmas room, which is open year-round and known just as, “Department 56” by Morgan and his wife Jacqueline, for the company that makes them. 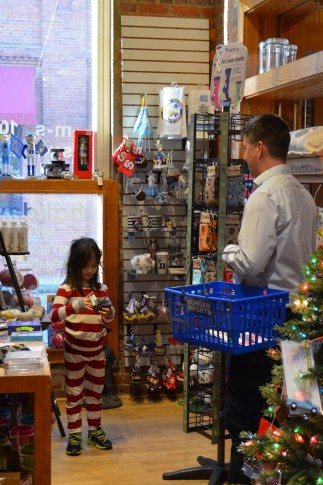 Morgan, at 84 years old, immediately said he had no plans to retire when he arrived for the interview.

“You’re used to working seven days a week,” Morgan said. “I’m 84, I’ve always worked for myself. I just never thought about retiring. We spend more time here than anywhere else.”

Morgan, a Durham native, first opened the store on Main Street. After a fire devastated the store, he moved it to its current location on Gregson Street in Brightleaf Square in 1981. Jacqueline Morgan, 78, was then a customer and met Richard at the restaurant he also owned at Five Points. She married him and joined him in working at Morgan Imports.

There’s just a handful of businesses that have been in downtown Durham for that long, and Morgan Imports is one of them alongside Ward’s Furniture and Stone Bros. & Byrd.

With experience and instincts honed over decades, the Morgans don’t overthink about what they like and what sells, and that fluidity shows in the cohesion of the store.

They also get some help from loyal customers who’ve been shopping there since practically when it first opened. The store held an anniversary party in November and long-time customers showed up, as well as employees, many of whom have worked in the store for decades.

Leah Johnson has been a customer since shortly after she moved to Durham in 1971. She still has items she bought there from that time.

“I just loved the ambience and the variety of merchandise. And the clerks are always super friendly,” Johnson said. “The first thing we do when we come to Durham now is go to Morgan Imports. Now that we have granddaughters, we bring them and we always have something to buy, whether it’s for the kitchen, or the grandchildren.”

That’s not to say maintaining quality of goods and services has been easy. The past few years in downtown have been stressful and anxiety-ridden for small businesses. There was ongoing construction on multiple condominiums developments, which made getting around downtown uncomfortable and difficult for visitors, and traffic was also funneled too close to the store. Earlier this year in April, there was the explosion at Prescient on North Duke Street. More recently, there was more construction — this time, on the famous “can opener” bridge that has wrecked so many trucks over the years. That bridge is practically just outside Morgan Imports’ window.

Scenes from “Department 56,” the room full of Christmas collectibles. 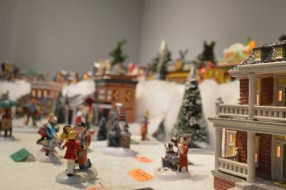 Retail traffic has also become more unpredictable. Richard Morgan used to be able to predict sales down to the hundred, but for at least the past decade, that has not been the case. And Millennial trends and shopping habits also have been hard to crack. Recently, unexpectedly, there was a wave of young people on one particular weekend. Why that weekend?

“We’ve noticed that trends don’t last very long. Trend up and trend down is maybe six to eight months. It used to be years. Trends with the Millennials are shorter,” Jacqueline Morgan said. “Now you’re also inundated [with social media]. Once you’re not there anymore, you’re looking for something new.”

“Online has certainly affected it. If you’re not used to touching things, then you’re not going to go out looking for it,” Jacqueline said.

“Online, a lot of young people do that. But online is good if you know what you want. We still offer that retail experience to people.” Richard added.

“It’s been a challenge to stay profitable too. 2008 was challenging. The last quarter was not good,” Morgan added. “But Duke is a very solid economy in Durham itself. So we were down 3 percent [in 2008] instead of 20 percent like some people.”

“There used to be a huge back to school season,” Richard Morgan said. “Probably ten years ago, that changed.”

And these times are a different beast in general. In the ‘80s, Jacqueline said, “There was nothing you could buy that didn’t sell.”

Although the 1980s had its own challenges. The gift industry had taken a blow from the AIDS epidemic, because many of the artists and artisans that made up the industry had contracted AIDS.

Going over their decades of experience, the Morgans went through their memories of customers and business people they have met, travels, and also popular items that used to fly off the shelves, like baskets, rattan furniture, black light posters, and stickers. “I always said, ‘At 10 cents each, they paid the rent’,” Jacqueline said.

“The most satisfying thing has been being able to travel and experience everyday people, everyday life wherever we go,” Richard said. “Not just traveling for business, but seeing how people live.”

On a recent afternoon, Kristen Butler and Sarah Tamore were admiring the coffee mugs and teapots in the store. “There’s a lot of really cute gift ideas,” Tamore said. She had come to the store more than a dozen times, she said, and brought her friend this time, who was on her first visit.

They had met up for lunch and decided to stop by afterward. The young women each held up tiny ceramic cats and smiled. “We’re commemorating our friend date,” said Butler.