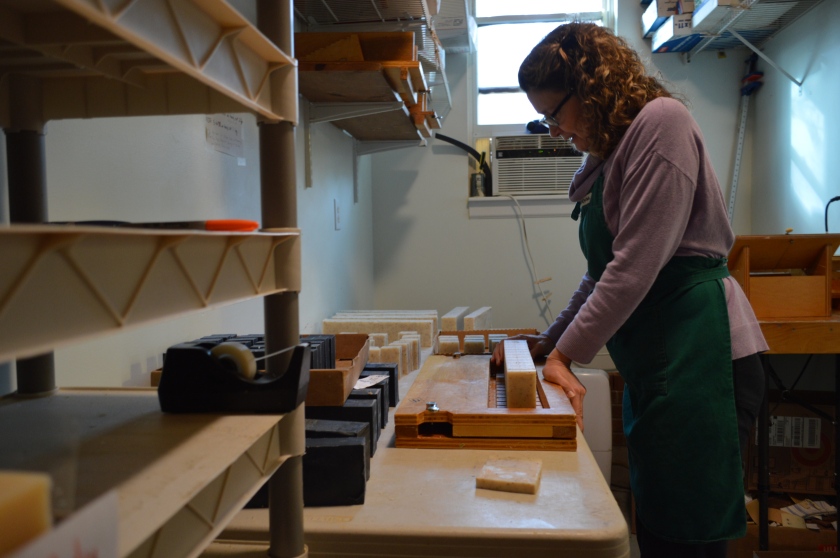 The workshop of MoonDance Soaps & More is so fragrant from the soaps made inside, the fragrance wafts out well beyond the shop, out to the driveway.

Inside the workshop, which is a converted garage, Rachel DuBois, founder and owner of the business, has finished a morning of mixing solutions and pouring. Now, it’s time to cut soaps and setting them aside to be “cured,” for the saponification process to complete.

The natural soap-making process, which takes 4-6 weeks from start to finish, is how DuBois has made her soaps since founding the business in 1998, and it’s one she steadfastly adheres to. Her staff will help with making other products and packaging, but she is the only one who makes the soaps.

“It’s a caustic process,” DuBois said, and added. “You have to be really respectful. My kids can’t come in here when I’m doing this.”

The soaps are poured into big molds, then set aside to cool. While they’re cooling, the soaps have the color and thickness of what look like beeswax candles. But DuBois warns not to touch the soft center of the batches. “They would still burn you,” she said.

Every now and then, a batch of soap would “seize,” which happens when the lye and the oils overreact. The chemical process accelerates and it hardens – “It turns into a solid right before your eyes,” DuBois said – so much that it cannot be poured into a mold.

“When you think about how people have made soaps, it’s amazing that hundreds of years later, we still encounter the same problems. And they were so good at the craft without having precise measurements or what we have now,” DuBois said, and joked about having a cauldron in the yard.

Well, there is no cauldron, but there is a bathtub in DuBois’ workshop. Many of DuBois’ equipment was made by herself and her husband, and pieced together. There is a raised bathtub used for washing the large tubs used for ingredients and mixes. DuBois had looked into getting a commercial kitchen sink, but that turned out to be too expensive, so she put in a bathtub instead.

Cutting the soaps. The cutting “board” is made by DuBois, and uses piano wires. 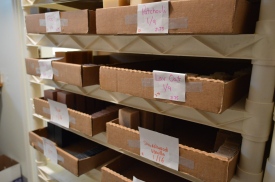 Boxes of soaps in the “curing room” at DuBois’ workshop.

DuBois cutting soaps. Her employees help with other parts of the business, but DuBois is still the only one who makes the soaps.

On a recent afternoon, DuBois and her staff were busy mixing, pouring, cutting and packaging.

While Christy Yochelson worked on making lip balms, Suzanne Sedelmeyer packaged the products and got them ready for mail. DuBois’ employees have stayed with her for years. They include stay-at-home moms, and young people who originally worked for her as teenagers, then go off to school and come back years later. Yochelson is a stay-at-home who previously worked in chemical engineering at N.C. State University, and began working at MoonDance in 2011.

Fresh flowers and colorful lights adorn the space. An avid hiker and runner, DuBois also has photographs and memorabilia from her adventures and races.

The soap curing room contains even more treasures made by DuBois and her husband, Paul. The instrument used to cut the soaps uses piano strings. And there is a raised platform that looks like it should be a salvaged machine of some kind. Was it a printing press, a sewing machine in a previous life? It also uses piano strings to cut long slices of the soaps. One of DuBois’ long-time employees has often broken the strings by using too much force, she said. “I finally told him, ‘If you’re going to break them again, you’re going to have to replace the strings yourself.’”

And then there are the shelves upon shelves of soaps. Tea tree, lavender and oatmeal, charcoal, Christmas forest, and the “Scratch and Dents,” which are an odd favorite among customers. They are pieced together from shavings from other soaps. That way too, all the soaps are naturally “recycled” in the soapmaking process itself.

The business recently redesigned its web site. Its old web site, which had a picture of DuBois with her daughter, Emily, said the following: “I began making old-fashioned handcrafted soaps as a hobby to regain a sense of connection with the products of the earth and to allow myself to express my creativity in a new way.”

“I’ve always been an introspective person. Always contemplating my thought processes, analyzing what makes me feel healthy and complete and what thoughts and actions leave me feeling depleted or stressed or unsettled,” DuBois described her philosophy in a recent e-mail. “Working with my hands…, creating something tangible, or doing physically repetitive tasks… have always offered a place of peace for my mind. Soap-making, while maybe not quite as repetitive as some of my other interests, was something that I found gave me great satisfaction mentally and physically. There’s a rhythm to it. A beauty to the magic of creating soap from oils. A tie to an ancient craft. All of this resonates with me and satisfies my need to create and produce.”

DuBois’ journey to becoming a soapmaker actually began at IBM, on the Research Triangle Park campus, where she worked in industrial engineering and operations research. She was a young engineer straight out of Georgia Institute of Technology. In just a few short years, she watched her job transform from overseeing manufacturing lines to making charts at her desk.

IBM had begun its many cycles of layoffs in the ’90s. “It was a dehumanizing process,” said DuBois.

“In 1997, I was so unhappy with it. So I took a vacation with a friend and we were in a 100-mile wilderness in Maine,” she said. There, she saw a man. A wild man who had been hiking for thousands of miles.

“That encounter fascinated me,” she said. It has stayed with her ever since.

After that, DuBois decided to take a six-month sabbatical and hike the Appalachian Trail, 2,100 miles. On that hike, she turned 30 years old.

“Six months later, I found myself with a backpack and my dog in Georgia,” she said. “It was one of the pivotal experiences of my life.”

At a hikers’ reunion afterward is where DuBois met her husband. She decided to tough it out for one more year at IBM, and started making soaps as a hobby to get through it. “I wanted to create something practical and useful, and that people enjoy using and has function,” she said.

The first time DuBois sold her soaps was when she took a few in a basket to sell at the Durham Farmers’ Market, which at that time was at the old ballpark, the Durham Baseball Park. That first basket might have sold $80.

Since then, MoonDance Soaps has added many more items, like lotions, baby products, lip balms, and makes more than $250,000 a year. That’s from sales in person and online, and as a wholesaler. DuBois used to make most of her sales at craft shows. She has served on the board of the Durham Farmers’ Market, and MoonDance still sells there every weekend.

There have been bumps in the road over the years. In 2015, for instance, the business that bought MoonDance’s Diaper Lotion Potion wholesale closed, so DuBois moved to selling on Amazon, which presented its own problems. In 2018, there was a pop in demand on Amazon for herbal products and the business could barely keep up with orders. “It made things unpleasant. We were stressed out, the place was packed,” she said. So, she stepped back from Amazon. More recently, there were also price fluctuations from fragrance and essential oil suppliers that MoonDance buys from.

Through it all, DuBois has tried to maintain a sensual cohesion and maintain the same workplace ethics from when MoonDance first started. She and Paul broke ground on the workshop in the first year of MoonDance, when she was pregnant with her first daughter, and she still works out of the same space. She started offering retirement benefits to her employees.The labels are designed by her and her long-time staff. And DuBois keeps good vibes in abundance. She fosters puppies, and employees help with carrying them from the car to their heated shelter. And she raises happy chickens.

“I wanted employees, and myself, to look forward to coming in to work. I wanted it to be a relatively stress free environment that offered our staff the satisfaction of a job well done and a sense of being appreciated and valued for their efforts,” she wrote in an e-mail.

Looking around, DuBois said that although her business is successful, she still does not want to outgrow her workshop.

“My employees have seen me pregnant,” she said. “[Outgrowing the building], I think that would change the vibe.”