At Gourmet Kingdom in Carrboro during a recent lunch hour, the restaurant is empty. A statewide shutdown on restaurants is in place because of the coronavirus. Outside on Main Street, the air is still and baking hot. People wander, beleaguered and stressed.

Inside the restaurant, the air is cool – there is still some normalcy. David Yu, owner of Gourmet Kingdom, is rushing from phone to kitchen with takeout orders and back to the phone, stopping to grab containers of soups.

“Business has slowed,” he admits, taking down the mask he’s been wearing to speak with a reporter. When asked if people have been nice to the restaurant, he replies, “I know what you mean.”

“There are some regular customers. They’re all pretty understandable. They don’t have any hostility toward us. They understand business,” Yu said.

“It’s definitely worrying,” he added. “It’s more worrying than for people who don’t own businesses. Everybody worries about their health, to not catch the virus. I’m worried for this business to survive.”

Yu hopes the Paycheck Protection Program will be able to help. The $350 billion program, which just launched last Friday, is meant to help small businesses survive for two months as well as incentivize them to keep workers on the payroll. The money can be used for payroll, rent, mortgage interest and utilities. If all employees are kept or restored afterwards, the U.S. Small Business Administration will forgive loans.

“Hopefully that can help us in time,” Yu said. “But there is a lot of difficulty, a lot of businesses applying and not too many lenders.”

Business has been declining for Asian restaurants since January, when fears of coronavirus took hold in Asian countries and among Asian-American communities. As fears in the U.S. also spread, the stress on Asian restaurant owners increased.

Wuhan, China, where the coronavirus was first diagnosed in November, went into lockdown on January 23. No traffic has been allowed in or out of Wuhan since then. The city just lifted the lockdown on Tuesday.

At Orient Garden in Durham, the owners in recent weeks built a makeshift takeout window by putting a plastic screen on a side door. Customers usually crowd into the restaurant and sit at tables while waiting for their takeouts. These days, they wait outside.

A customer, Noble Johnson, quickly steps to the window. Johnson and hostess Kimberly Lee both efficiently process the order and, as if by a heightened awareness, they both pump the hand sanitizer bottle afterward. The customer behind Johnson waits several feet back, although there are no markers on the sidewalk directing them to do so.

“I wasn’t sure if they were open,” Johnson said. “I just came to the restaurant for the first time a few weeks ago.” 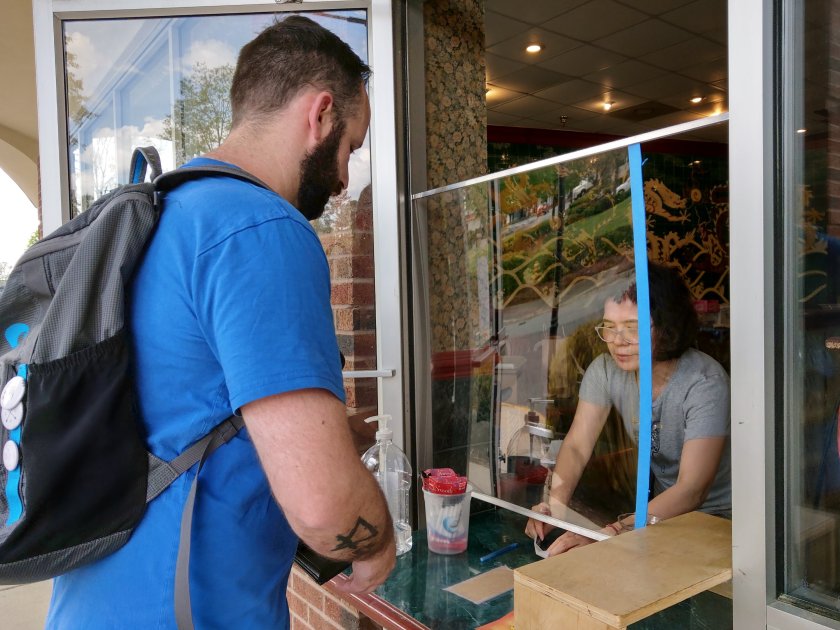 Noble Johnson places a takeout order with Kimberly Lee at Orient Garden in Durham. They are both heightened in being polite and efficient, and both pump the hand sanitizer afterwards.

“There is a lot of worry. We don’t know what’s going on,” said Yuk-Mui Wong, who co-owns the restaurant with her husband, Raymond Wong. “It’s confusing. We don’t know how long we can do this.”

“It’s just that we scare each other, right?” she added, and laughed. “So this [screen] is good protection. This protects employees. Some customers do have concerns, so this helps.”

At Li Ming’s Global Mart in Durham, shopper Haechul Shin said he’s keeping track of the situation in the U.S. and in South Korea. “They’re managing it,” he said.

“All you can do is make sure things are sanitized,” he said.

At China Palace Restaurant, Manager Alice Hung emerges from the kitchen to the front counter to answer a takeout call. The restaurant, located at Garrett Road and University Drive, has changed its hours.

“It’s OK. We just survive,” she says, her stressed demeanor relaxes as she answers a reporter’s questions. “Hopefully, this will be over soon.”