In the small cabin that is the office of Piedmont Wildlife Center, there are a turtle and a rabbit. In a few moments, a Barred owl emerges, perched on the arm of Gail Abrams, formerly the long-time executive director of the nature education nonprofit.

Her name is Athena, and she blinks, looking sleepy to be brought out in daytime.

She came to Piedmont in 2011. One of her eyes is blind. As she perches, she looks only at Abrams. “She’s bonded to me,” Abrams said, herself donning a shirt with a print of owls.

Outside, the drizzly rain makes the greenery surrounding the small cabin lush and abundant, almost overwhelmingly so. Chickweed, leafy docks, an elderberry bush and other plants, both beautiful and harmful, dot the landscape.

Karen McCall, the new executive director of the center, sits on the front porch to talk about the center’s mission and look ahead. McCall first started volunteering at the center in 2012 and then became the director of education.

A Chapel Hill native who studied math and physics at UNC Wilmington, McCall lived on a sailboat in Puerto Rico for much of the ’90s. When she came back to the U.S., she worked at the Discovery Place Museum in Charlotte. In her background is a scientific-minded adventurousness. Her father taught microbiology. She can still remember her math professor’s main intellectual pursuit. “Infinite dimensions,” she recalls and smiles.

McCall also brings a down to earth casualness to Piedmont.

“She has such fortitude,” said board member Nicole Archuletta. “I feel like she’s going to take it and bring in all the fresh air we need.”

On a walk through the 83-acre wooded property the center operates on, McCall stumbles upon a father and his group of kids with a campfire in “fox circle,” used for storytelling and other activities. Campfire is not allowed on the grounds, under the rules set by Durham Parks and Recreation. She chats with the group casually. The conversation is light, the father explains they came all the way from Woodcroft, she recommends some other outdoor areas they can check out. The kids show off their knives. Gradually, they put out the fire and move off. 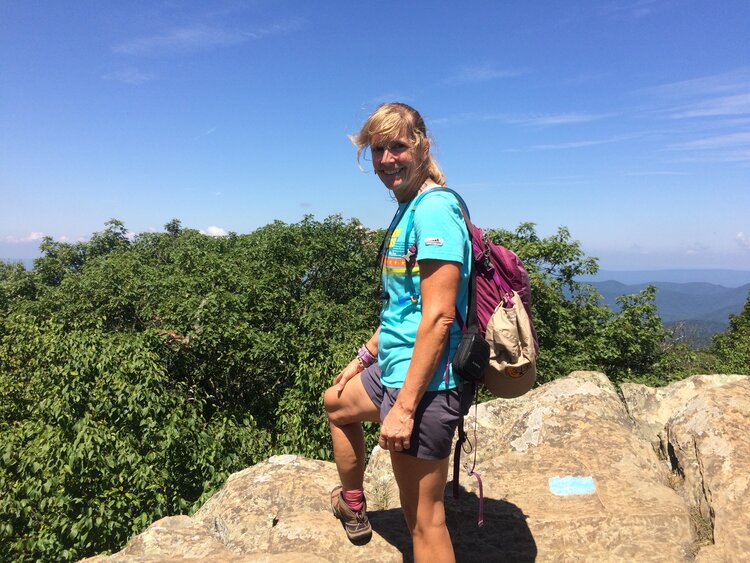 Growing up, she remembers spending much of her time outdoors with her parents. “I’ve always loved being outdoors. We used to sail and hike. We’ve camped in all of the contiguous U.S.,” she said.

Such carefree days is not what’s happening currently.

McCall started her new position in the midst of the coronavirus crisis. The original plan was for her to start on April 1. Then, the crisis exploded, and that date was moved up to March 27, which makes her laugh. “I guess the original date was going to be April Fool’s Day, so maybe this is fitting,” she said.

The immediate concern, apparent as she starts to talk about the center, are the summer classes.

In general, classes make up for as much as 80 percent of the center’s funding. They are up in the air now because of the lockdowns as a result of the coronavirus locally and statewide. Summer classes are the biggest draw. About 800 kids attended them last summer.

“My focus is trying to reimagine where we go from here and still follow our mission,” McCall said. And a big part of that will be trying to stay afloat and focus on fundraising.

Archuletta said Starling and the center parted ways because of fundraising issues.

“There was a lack of fundraising happening,” she said. “When he left, we were left in a debt that we weren’t aware of. There were some financial issues, and it was just best that we went our separate ways.” 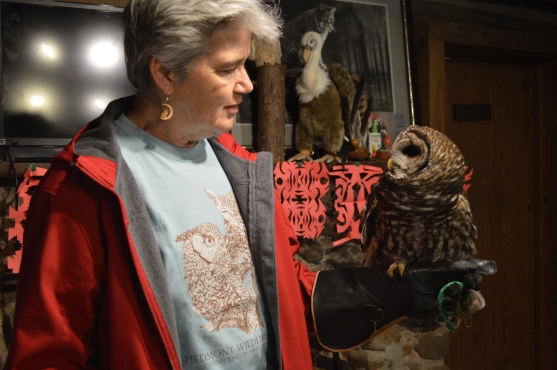 Gail Abrams, the former long-time executive director of Piedmont, with “Athena,” one of the Barred Owls at the center, who is bonded to Abrams.

The historic house at Leigh Farm Park, the 83-acre park where Piedmont is located. 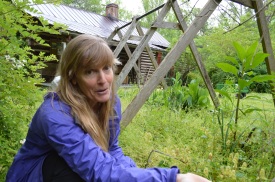 McCall talking about some of the plants near the main cabin.

Then, with the coronavirus crisis shutting down all aspects of life, not only does that mean a loss in revenue from classes, but Piedmont’s leadership is also wondering how it will affect donations.

“A lot of people are not making money. So the question is also, ‘Will we be able to make enough in donations?’ ” Abrams said. “Unless we can get help with donations to get us through this, it will be difficult to survive.”

The organization has moved fast to make up for the sudden loss in revenue.

The center has seven full-time employees and 30 in conservation and volunteer positions. Most of the staff had been on hiatus since the lockdowns began, but the center has already gotten a loan from the $350 billion Paycheck Protection Plan, the federal bailout plan launched in March to help small businesses and nonprofits maintain their payrolls during shutdowns. As a result, the rest of the staff will be back on Monday.

Piedmont has also started a new online offering, “Owl Bombs,” where their owls are guests “bombing” people’s online meetings. The idea has proven to be a hit. People from as far as Germany and Hong Kong have been interested, McCall said.

Piedmont Wildlife Center was originally founded in 2002 as a wildlife rescue organization. The founder, Bobby Schopler, is still on the board. Since then, Piedmont has changed its mission to be more broadly connecting people with nature.

Even since McCall started at the organization, it has gone through a period of rapid change.

Durham Parks and Recreation has paved over the gravel roads leading up to the small cabin and installed a visitor center. Palladian Place Apartments has also added new condominiums just beyond that narrow, barely two-lane road.

Traffic from visitors has also at times flooded the center. For the Winter Solstice gathering in December, Piedmont’s Facebook post announcing the event was shared a thousand times, and about 80 people showed up, more than expected.

“In the last couple of years, [attendance] has kind of plateaued. Our camps have grown,” McCall said. Piedmont started camps in Wake County four years ago.

Now, Piedmont is gearing up for another period of change.

“It’s very disheartening in one way but also encouraging in other ways,” Abrams said. “I think it will be very hard, but I think we will come out stronger in the end.”

Ask McCall what her favorite class is at Piedmont, and she’ll talk about the homeschool kids and the afterschool programs.

“It’s a program where kids can mentor each other and it has a different energy,” she said. “And kids coming from school, they can run around here barefoot.”