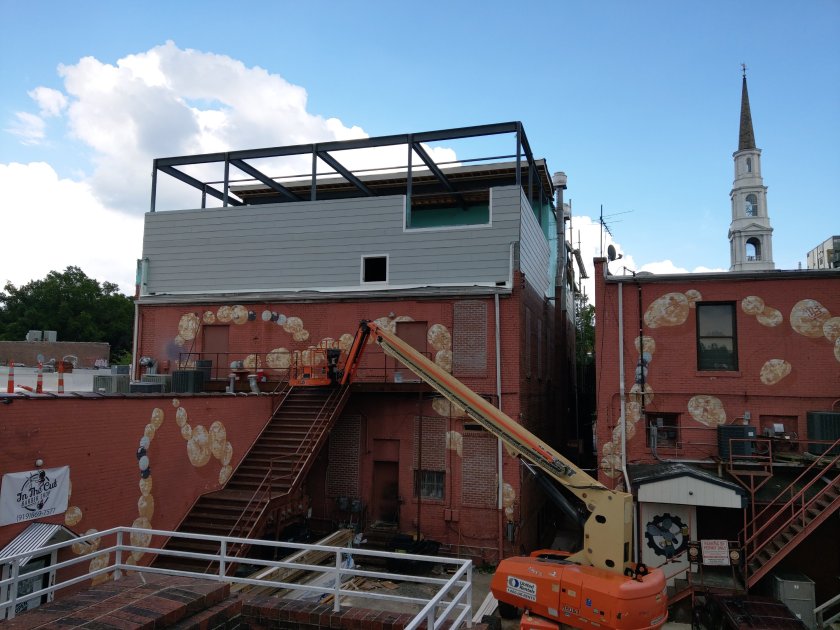 The awning and lights over Amber Alley have been removed, and the ground is still wet from rain. At the alley’s back entrance sits heavy machinery for the construction of a nightclub, called StillLife Nightclub, on the roof of Sutton’s Drug Store.

Sustaita says through his mask that he’s looking forward to the boost to his restaurant the renewed traffic would bring. “There used to be Players upstairs,” Sustaita said. “Hopefully, they know what they’re doing.”

But when asked about the plans to turn Wallace Parking Deck into an office building with wet lab space, Sustaita draws in his breath. “Now that, that is bad,” he said. “There’s not enough parking in this town to begin with.”

“Between COVID and that, my prediction is we will not survive,” Sustaita said. “We’ve been open for 25 years, but that would be too much.”

The plans for the area around Sutton’s is just the start of Chapel Hill town government’s plans for downtown on the whole.

In February, Mayor Pam Hemminger filed a petition to expand the types of retail allowed downtown to include “experiential retail,” such as health clubs of over 10,000 square feet. On June 24, the town council approved the new ordinance. The change will affect most other shopping centers around town. At the same time, Chapel Hill Downtown Partnership in May unveiled a new initiative drawing on the same design motifs as the biotechnology industry. The blue and yellow flags for “Experience Downtown Chapel Hill,” or “XDCH,” have been put up in recent weeks.

The Sutton’s area is where the biggest construction work is planned, and the stress and effects of that already are felt. A part of Franklin Street that used to be vibrant and friendly has become hot, dusty, empty, and turned inside out.

The CVS building, located at 136 E. Franklin St. and 137 E. Rosemary St., used to be known as the Bank of America Center, for the bank that had a branch there for 39 years until it closed in 2012. The building has housed offices, restaurants, bars, and also UNC’s annual student art sale on the back. Grubb Properties, the town of Chapel Hill and UNC want to turn the building into an “Innovation Center,” with a new façade, a new lobby, 16 new restrooms, new roof, new LED lighting, and demolition of all interior walls, according to Grubb’s marketing brochure.

At the parking deck at 125 E. Rosemary St., Grubb wants to build a new 1,100-space parking deck with a “retail porch.” The development would also completely remake the look and feel of much of Franklin Street and Rosemary Street. Grubb Properties wants to widen sidewalks and install bike lanes, build a “town green” space in the back of the Post Office, and turn the bottom of the parking lot by the CVS building into an “urban park.”

The proposed development will use tax credits from the “Opportunity Zone” designation over the area. Opportunity Zones are a federal program created in late 2017, and are supposed to spur development in economically distressed areas.

At the June 24 town council meeting, the public hearing for the development was scheduled and there were no speakers. The rezoning for it was approved. An economic development package was not ready to be presented to the town council. That has been continued to September.

“This is going to affect all of us.”

At Gizmo Brew Works, which opened just in December in the space of the old The Rathzkeller, a long row of taps of beer, wine and cider lines the back wall. Around the restaurant are old photos of the Rathzkeller crew that were left behind, put up out of memory and fondness of the history of the space.

Manager Cynthia Burkins echoed Sustaita’s concerns. “The biggest problem with Chapel Hill is parking,” she said. “And one of the things we’ve talked about with the town is renting the top (of Wallace Parking Deck). If they demolish it, where are people going to park?”

“This is going to affect all of us. So I’m not happy with it,” Burkins said.

At the barbershop In the Cut, owner Scott Seymour said he’s been a barber for 10 years and this was his first business. He just opened last August. Construction materials for the nightclub lie just steps out of his front door.

When asked for his thoughts on the possibility of the parking deck being demolished right by his business, he brushed it off.

“As long as it brings business,” Seymour said and kept on trimming a customer’s hair.

On a recent Saturday, when there were crowds walking up and down Franklin Street and people sat at Carolina Coffee Shop’s outdoor seating, Sutton’s was surprisingly empty. Like the managers and owners of the other businesses in the area, Sutton’s Manager Don Denney hopes the new nightclub will bring more traffic. And like others, he points out there have been other bars over the years above Sutton’s.

Denney has worked at Sutton’s for 45 years. StillLife Nightclub is building a new elevator exactly where Denney has parked for decades.

Construction on the nightclub has drawn the attention of Chapel Hill’s Community Design Commission since it did not get a special use permit before getting site plan approval. Sutton’s Drug Store has been open since 1923, and the Strowd building that houses it is in the National Register of Historic Places. The Design Commission has submitted a petition to the town council to get better controls over changes in downtown.

“That is probably the worst decision this city has ever made,” Sustaita said of the plans to demolish Wallace Parking Deck. And on the proposed office building, he added, “We have a lot of empty office space all over the city.”

The plans for the area around Sutton’s is just the start of the changes about to happen in Chapel Hill, as a result of recent moves by town leadership and economic development officers to expand the definitions of retail.

In February, Mayor Pam Hemminger filed a petition to allow for “experiential retail” in downtown in order to help the 140 West mixed-use development sign an escape room as a tenant.

At the Feb. 19 town council meeting, Hemminger said, “Right now, in our Land-Use Management Ordinance, we don’t have experiential retail as a category. Therefore things like an escape room that’s considering coming to our downtown wouldn’t be allowed or they’d have to go through an entire (special use permit) process just to get that particular use.”

Matt Gladdek, executive director of the Chapel Hill Downtown Partnership, spoke in favor of the petition at the meeting. “This is very timely,” he said. “Right now, we have a lease signed at 140 West for this land-use for an escape room. If we don’t move quickly, there will be an escape clause for them to leave their lease.”

During the June 24 town council meeting, Chapel Hill planning department presented the ordinance to change various definitions in land use.

Anya Grahn, Chapel Hill town planner, said, “As we were looking at the general business definition, we realized that we could just expand it to be much more simplified… . And this would allow us to encompass experiential retail use without having to specifically define it. This way, experiential retail would be allowed to be in the same zoning districts where business general exists today anyway.”

The new ordinance was adopted by the town council unanimously.

This change for “experiential retail” expands the businesses allowed in most shopping centers in Chapel Hill, not just downtown but also areas zoned Neighborhood Commercial and Community Commercial. Those include the following: the shopping center with Flyleaf Books, University Plaza mall, the Glen Lennox and Fresh Market centers, the site of the future Wegmans and the Lowe’s shopping center across U.S. 15-501, the commercial stretch with Caffe Driade and others.

Town planners also changed the definition of “business general,” from specifically citing grocery stores, department stores, florists, and among others that “in addition to serving day to day commercial needs of a community, also supply the more durable and permanent needs of a whole community.” Now, it is more broadly any retail that’s within the tenant space.

“I for one am very excited to see this move forward,” Hemminger said at the June 10 presentation.

The press release announcing the new initiative on May 29 emphasized social distancing and increased sanitation measures, and the announcement was led by UNC.

“Downtown Chapel Hill has long served as a gateway to the University, and we know that businesses are ready to safely welcome back our students, faculty and staff,” said Joel Curran, vice chancellor of university communications at UNC, in the news release. “Every time we buy local, we invest in our vibrant community and support our neighbors and friends who help make Chapel Hill one of the best college towns in the country.”

“Experience Downtown Chapel Hill” is asking for donations for businesses dealing with setbacks from COVID-19. The initiative also proposes a new mural in downtown, withindividual tiles featuring pictures of people to “represent the diversity of the Chapel Hill community and its residents.”