A door slams shut behind a satisfied customer and another door opens with a new customer not far behind.

This happens all day long, three days a week in the small, cinder-block shack that houses Tom Robinson’s Carolina Seafood of Carrboro.

With a small staff, the business manages to get to the North Carolina coast every Wednesday to get fish and shellfish to sell in the Piedmont on the weekend. It brings in salmon from Nova Scotia, and some oysters from Virginia, depending on the season, but almost everything comes from North Carolina.

Manager Salvador Bonilla generally travels to Morehead City, Swansboro and Beaufort to deal with the local anglers there.

Tom Robinson started the business in Chapel Hill in 1975, selling from the back of a truck parked at Pantana Bob’s bar on Rosemary Street.

Tom Robinson’s Carolina Seafood Manager Salvador Bonilla cleans a salmon and readies it for sale at the business. Photo by Matt Goad

Bonilla has managed the business for the last 16 years. He didn’t know much about the fish business at the time. He worked as a chef at Vespa, the defunct Italian restaurant on Franklin Street, and Robinson supplied the restaurant with fish.

Bonilla asked Robinson about working for him part time, and ended up managing the shop for him.

About six or seven years later, Robinson died, but his girlfriend talked Bonilla into keep the business going under Robinson’s name.

Bonilla deals with the same sellers he has dealt with for years, all small operators. “I like these people,” he said.

Instead of trying to bring in the same varieties of fish and shellfish week and after week, he goes with what is freshest. Top sellers include salmon, tuna, shrimp and red snapper.

Bonilla said he tends to sell crabs on nice days and shrimp on rainy days.

He gets a lot of requests for lobster and cod from New England, but he doesn’t carry them.

Including Bonilla, the business has four employees. John Pereti followed his brother David to Robinson’s.

David said the hardest part of the business is learning all the different fish.

“That’s because you already had knife skills as a chef,” John replied.

Red snapper is on sale at Capital Seafood. Photo by Matt Goad 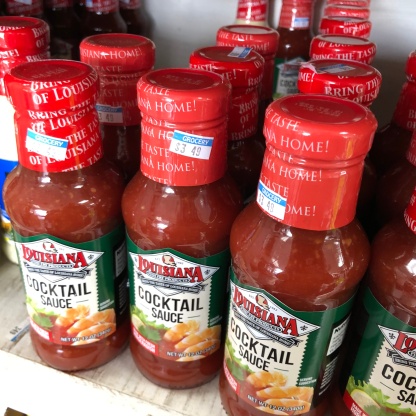 The store also sells some seafood amenities such as tartar sauce and cocktail sauce. Photo by Matt Goad
On a sunny Friday afternoon at Capital Seafood Market in Durham there’s no place to park. An attendant in a yellow vest helps cars find a place as other customers back out to leave.

Friday is the market’s busiest day, owner and founder Dwayne Greene said. The market is open seven days a week.

Greene, originally from Raleigh, started a Capital Seafood Market, which is still in business, in Raleigh 28 years ago. He opened his Durham location on University Drive 20 years ago.

“I saw a man selling fish on the side of the street, and I thought I could do it better,” he said. “I knew nothing about fish.”

Whereas Tom Robinson’s specializes in North Carolina seafood, Capital is global, both in its sources and customers, taking advantage of the Internet. Capital delivers all over the world.

And unlike Tom Robinson’s, Capital offers the same varieties of fish and shellfish every day. The market carries 35 different types of seafood every day. “Everything that swims we got to have it,” Greene said.

The Durham Capital also has a small restaurant specializing in fried seafood but also offering soul food and fried and baked chicken.

Iris Monroe of Durham said she comes to Capital about every two weeks. She generally shops for porgies, catfish, spot, shrimp and scallops.