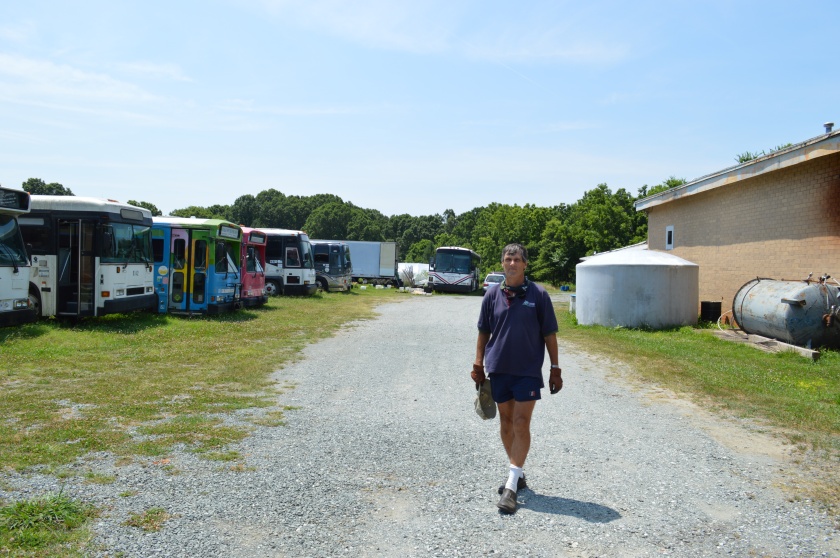 Behind a small, nondescript building in Efland, a gravel driveway reveals an old textiles manufacturing warehouse, biodiesel production tanks and rows of vegetables at the Orange County Eco-Innovations Park.

A fleet of buses that run on biodiesel sit across from the warehouse. “This pink party bus runs green!” whimsical slogans on the front say. “We are a revolution in motion!”

Because of the coronavirus, the buses have been out of commission, and the Eco-Innovations Park’s founder and General Manager Marc Dreyfors is busy working to to keep his nonprofits and businesses afloat.

“That was a blow to us,” Dreyfors said of the buses.

Walking across the sun-baked grounds toward potted hemp plants and rows of vegetables, Dreyfors stops to examine the squashes and help a worker fix a stand of tomatoes that have drooped over.

Dreyfors’ main enterprise is the nonprofit, The Forest Foundation, which he founded in 2001. It’s the umbrella organization for Carolina Biofuels, Greenway Transit, Green Tracks, Forests of the World, and the newest business, CannDo CBD Oil. After a grant application to Durham City fell through earlier this year and then the coronavirus, Dreyfors is focused on securing funding and revenue.

“We’ve been over the years so under-resourced,” Dreyfors said during a phone interview. “We’re very lean, and we can survive through the worst situations. 2008 was brutal and things slowed down pretty significantly. But we’ve been able to grow and make it.”

“But man, everything is hand-to-mouth. We want to go from, ‘That’s a cool thing you’re doing’ to, ‘Wow you’re really making a really cool impact.’ We’re tired of being the cool poster child. We want to make an impact,” he said.

Dreyfors examines the vegetables growing at the park in Efland. He has also started a CSA in hopes of generating additional revenue. 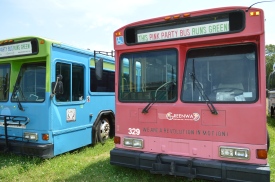 A fleet of buses that run on biodiesel sit on at the park, reminders of Dreyfors’ work over the years.

The organization moved from East Durham to Efland a year ago, and Dreyfors has ventured into something new – growing hemp for the CBD business, and vegetables for a CSA, or community-supported agriculture.

The organization recently got back Duke University’s physician’s assistants program as a customer for the biodiesel buses.

Within the industrial space and office of the old textiles warehouse, Dreyfors talks about the possibilities of the site. There is compressed air in the warehouse, room for biodiesel production, and barrels of harvested hemp.

The center, at 2.8 acres, is bigger than his old site on Cross Street in East Durham, which means there is more room to grow and expand. However, it’s also removed from the urban environment in Durham, where Dreyfors had been based for more than a decade and built his eco-innovation philosophy.

East Durham was where he had converted a polluted brownfield site to producing biodiesel, worked with young people, and been involved in other environmental organizations. The pedicabs Dreyfors used to ride around Durham now sit unused in the warehouse.

But some things remain the same. There is his main work: converting restaurant grease into biodiesel. He is hiring. “We have a lot of work,” he said.

The draw of biodiesel is that it is – in the terminology of the green space – a “drop in” technology. That is, biodiesel, made from restaurant grease and vegetable oils, can be readily used in diesel-running vehicles without having to modify the engine.

Dreyfors’ Carolina Biofuels has three active pumps in the Triangle. At the Eco-Innovation Park, Larry’s Beans in Raleigh, and at Carrboro Public Works, where Dreyfors said they’ve had problems with the pump being shut off without notice. 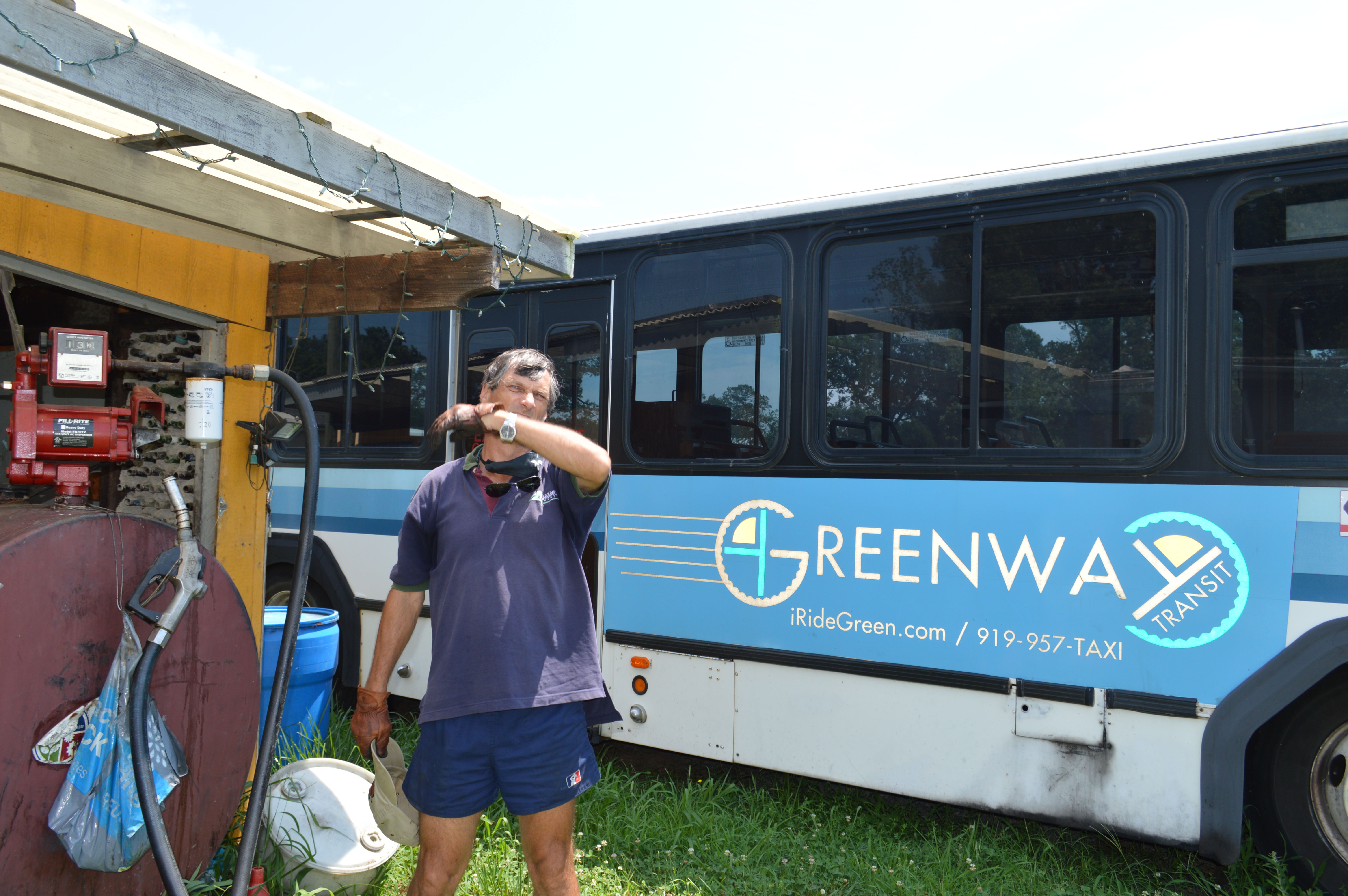 Dreyfors at the biodiesel pump at the Eco-Innovation Park.

Biodiesel is also at the intersection of Dreyfors’ interests, which is summed up with The Forest Foundation’s “GOAL” model. “GOAL” stands for “Green Oil and Light.”

The “Green” stands for the work of shifting energy away from fossil fuels to renewable energy. The “Light” is about “finding the light” in community and neighborhood-based redevelopment. “This provides a great stage for the work being done, in transformation, regeneration and renewal,” states the foundation’s web site.

Dreyfors counts among his supporters other organizations in the area that have succeeded in the green space.

Eric Henry, president of T.S. Designs, the organic cotton T-shirt maker in Burlington, also has been interested in biodiesel. “I was big into biodiesel,” Henry said.

“It’s a renewable resource and not a fossil fuel. Typically what we do personally is we blend it with regular petro diesel. The main thing is it adds better lubricity. It’s slicker,” Henry said. “With my Volkswagen Golf, we could run biodiesel or straight vegetable oil. You can run 100 percent biodiesel or 100 percent diesel or any combination.”

“Marc and I are very much on a similar journey. People, planet, profit,” Henry said, referring to the triple bottomline of the green space.

Stephen Hren, who works in sustainable building, used to work for Dreyfors in Green Tracks and praised him for his dedication. Green Tracks is the green jobs training program of The Forest Foundation.

“For a dozen years, Marc has kept his sustainable tour company going on the most shoestring of budgets, hardly paying himself anything,” Hren said in an e-mail. “Many of his employees have substance abuse or are ex-felons who most employers would not bother to deal with. But despite his mordant humor, Marc has a deep-rooted faith in humanity that is exceptionally inspiring.”

Throughout his work, Dreyfors displays an interest in community work and wanting to work with young people, combined with an instinctive desire to work with real materials — biodiesel, buses, pedicabs, hemp. He also has a thirst for the big thinking in the environmental space, connecting the macro to the local and making it relevant to real work.

The work of converting restaurant grease into biodiesel, for instance, puts Dreyfors into the community, going to restaurants and engaging with owners. And it’s hands-on work, which Dreyfors has been drawn to throughout his career.

A Wilmington native, Dreyfors graduated from UNC-Wilmington with a degree in environmental sciences in 1988. While a graduate student at the Duke Nicholas School of the Environment, he and a classmate discussed biodiversity conservation and sustainable development. After graduating, the two classmates began what would become Dreyfors’ first business, Forests of the World, importing crafts from Costa Rica and creating educational materials about rain forests.

Some of these wares are still in the office of the Eco-Innovation Park.

In 2001, he founded The Forest Foundation, the main umbrella organization over the other ventures. Its website proudly touts proudly the work they’ve done, from having a booth at the North Carolina State Fair to Green Tracks, its venture for green jobs training, founded in 2009. 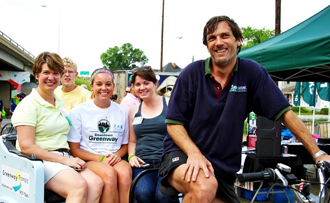 One of his favorite projects is the buses. Dreyfors passionately talks about the benefits of running buses, especially school buses, on biodiesel.

“It’s a lot of pollution that affects kids,” he says.

Ask him about a new technology, and he says and laughs, “I’ve probably read everything about that.”

Having worked with the environment for decades, Dreyfors is also familiar with the emotional and spiritual work that has to be done. If you share your own frustrations with him, he nods knowingly. Yep, he’s been there too. “Just breathe through it, work through it,” he says.

Dreyfors’ organizations has never made too much in revenue, and he wants to change that.

According to tax filings, The Forest Foundation normally posts a combined total of revenue and grant funding and contributions of under $50,000. 2010 and 2011 were its best years, when it reported $50,344 and $86,587 total revenue, respectively.

Adding to the low revenue have been problems over the years with finding and keeping a permanent space.

In 2009, Carolina Biofuels was evicted from its space in East Durham off Angier Avenue. There, Dreyfors’ organization worked with young people with YIKES!, or Youth Involved in Keeping Earth Sustainable, painting an eco mural and rain barrels, and helped Recyclique, another nonprofit focused on sustainability, get off the ground.

Orange Recycling Co., owner of the site, decided to lease it to another business instead.

“We constantly roll ourselves into a situation where there are all these benefits from what we want to do,” Dreyfors said, but admits that finding people to pay for it is a problem.

There is also a potential problem with the new site in Efland. Orange County officials have told him to pave the gravel driveway and put in parking spaces. “But why would you do that?” Dreyfors asks.