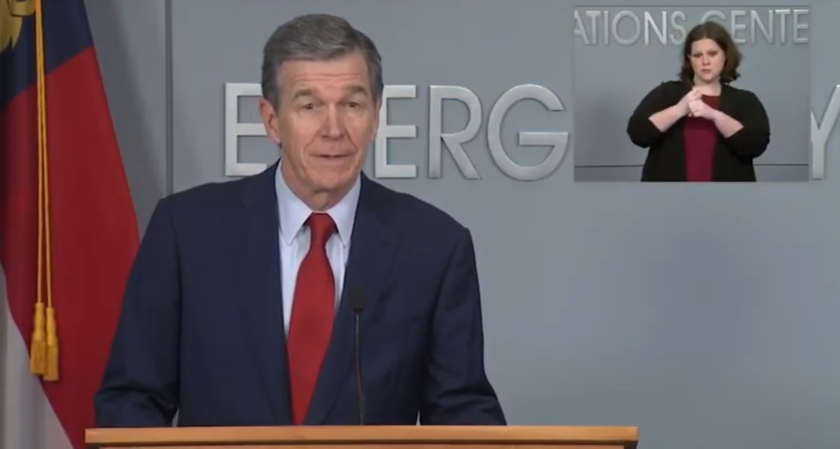 “Now more than ever, governors and state legislatures must stand up for women’s healthcare,” Cooper wrote on the evening of May 2.

The next day, Cooper also joined 16 other governors to call on Congress to “protect access to women’s health care,” he wrote in another tweet.

“Reproductive healthcare decisions are deeply personal and should be made by patients in consultation with their health care providers, not by politicians,” the letter signed by Cooper stated, to push Congress to pass the Women’s Health Protection Act.

But according to N.C. Attorney General Josh Stein, Roe being overturned means North Carolina will revert to abortion being legal for the first 20 weeks of a pregnancy.

If Cooper wants to discuss women’s health, then the first thing that must be confronted are the negative impacts of two years of lockdowns on women’s health, including: mask mandates, social distancing, vaccine mandates, vaccines with unknown long-term effects, boosters with unknown long-term effects — both especially on women’s reproductive health — and that’s not to mention dealing with the lockdown’s effects on their children.

The governor declared a State of Emergency on March 10, 2020, and immediately imposed lockdowns and mandates statewide — on a mere seven cases of COVID total in North Carolina. Two years later, that State of Emergency remains in place despite much public outcry and furor from women who want the right to control their own health — the decisions of which should be made with their doctors, not by politicians.

Adding to the insanity of a two-year-long State of Emergency is Cooper’s refusal to answer basic questions.

For example, is North Carolina still actually in an emergency? He will not answer.

During the press conference on March 17 to announce a “new phase” of combatting COVID — during which Cooper also said he will not waive the gas tax temporarily as other states have done to help workers — a reporter asked: The State of Emergency. Is that coming to an end?

Cooper’s response: “It gives flexibility to health care providers to help with surges that come. And it helps health providers distribute vaccines and treatment to people. We’ve presented to the General Assembly we can pass to end it.”

The reporter then asked: But where are the surges and with many people having taken the vaccines? Why is the state of emergency needed? Are we really facing an emergency anymore?

So this is particularly concerning. If the governor can’t even say whether or not we are in an emergency, why is the order needed?

And if the governor cannot say whether there is an emergency, why would the state legislature give him the tools with which to implement it?

If the governor cannot even say whether there is an emergency in North Carolina before taking control of health decisions, why should women listen to him about our health, about our reproductive health?

Other important moments from the March 17 press conference and some questions they raise:

“Over the last two years, we’ve written a history of hardship and resilience, setbacks and successes. But now, we enter the next phase, one of individual responsibility, preparedness, and prosperity. It’s time to chart the new course. This virus will still be with us, but it won’t disrupt us. We must remain prepared for the potential of future surges though, and this will mean some specific changes in the way we move forward from here.”

Question: If the next phase is one of individual responsibility, why is the Emergency order in place? Why are people in North Carolina not allowed to control our own health?

People want to return to their normal routines, which they can do because of free and effective vaccines, boosters and other tools that help people manage their risk.

We will continue to ensure access for information and resources, especially for historically marginalized populations, people with disabilities, and older North Carolinians. Data will continue to drive our response as it has through the entire pandemic.

Then, Kinsley said positive test counts will no longer be the focus of NCDHHS. Instead, the metrics to determine if the public is healthy will be: Wastewater surveillance; COVID-like illness; Hospital admissions; Case trends; Boosters; Prevalence of variants; CDC Community Level metric;

Question: Why is NCDHHS employing more rigorous metrics now that COVID is subsiding? Why are positive tests of the actual virus not counted, but “COVID-like illness” is? Why are case counts and vaccination rates no longer necessary in a pandemic necessitating a State of Emergency?

… The pandemic taught us that conditions can change rapidly and our workforce, businesses and communities must be skilled enough to adapt and grow.

Kinsley on new variants from Europe:

But the immunity from Omicron and vaccines remains most protective against the most important thing, which is severe disease, ending up in the hospital. We’re ready for those waves. We’ll remain vigilant. We’ll remain communicating about what we’re seeing as that comes.”

Susan Kansagra, head of the Chronic Disease and Injury Section of DHHS:

We are incredibly concerned about what the lack of funding at a federal level means to us at a state level. We know certainly, vaccine allocations, purchase of antibodies, those things need to happen in advance with manufacturers to make sure there is enough supply.

Another immediate impact is that providers will no longer be able to bill through the HRSA uninsured program. … Hundreds of millions of dollars have gone to providers in North Carolina to provide this care.

Federal investment keeps the production of tests and treatments high, which is what we want. We’ve seen how fast a surge can come. So we have to be ready. And already, they’ve talked about because Congress failed to pass the additional funding in this last legislation, we’ve already seen a 30 percent reduction in monoclonal antibody treatment that we’ve received from the federal government. We can manage that now because things are low, but that’s the kind of thing that we really can’t afford.

One reporter asked about the availability of vaccines for children in K-12. Cooper said:

“We are encouraging vaccines for everyone who is eligible, including children.”

The worst question at the press conference was on boosters:

So many people across the state got their boosters, roughly six months ago. By that six-month rule, a lot of people would be eligible for another booster kind of in the springtime. Is there any plan to make a fourth vaccine available to this population?

Question: Why would you need a booster shot for anyone before they are even sick?